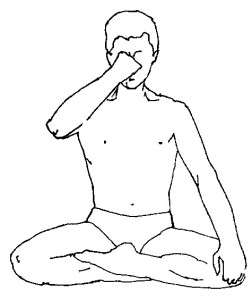 One primary prerequisite to initiation into a Tri Bandha Sādhana
was an ability in Prāṇāyāma within a Vinyāsa Krama around
Nāḍī Śodhana where the crown was 12 breaths at 12.12.12.12.

Thus, before being taught Uḍḍīyana Bandha,
an essential precursor to Mūla Bandha,
there needed to be competence in sustaining Prāṇāyāma,
within a Vinyāsa Krama leading to a crown ratio of 1.1.1.1.
with the Pūraka, Antar Kumbhaka, Recaka and Bāhya Kumbhaka
each set at 12 seconds in a crown of 12.12.12.12. for 12 breaths.

Thus, a Vinyāsa Krama peak of almost 10 minutes sustaining the crown
ratio within a Prāṇāyāma practice, with the entire practice itself totalling
over 20 minutes, all performed with one technique, Nāḍī Śodhana.
This technique alone is already in itself demanding to sustain with
an inaudible softness, as if pouring oil slowly and smoothly amidst
an almost undetectable deftness of finger movement on the nostrils.

A further example of how there needs to be an effortless skill in working
with the Kumbhaka and how our fluency with all four components of the
breath sets a practice direction and evolution in that, amongst other goals,
it determines our readiness to incorporate the Tri Bandha into our Sādhana. 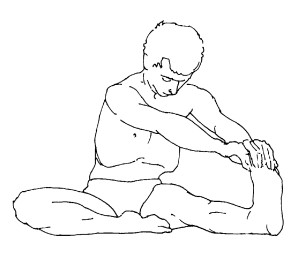 It also appears that there are differing certainties within
the modern use, definition and application of the two terms,
with a single contraction variant of Aśvinī Mudrā often being
passed off in ‘Krishnamacharya’ terminology, as if Mūla Bandha.
For example, Mūla Bandha being described as somethng you
take all the time whether sitting, talking, walking, or eating.
This would not be possible given T Krishnamacharya’s view of
what is Mūla Bandha and its relationship to Uḍḍīyana Bandha.

Also, the use of Aśvinī Mudrā can produce gas and
too much use can affect the peristaltic reflex.
Plus avoid in certain conditions such as haemorrhoids.
Āsana can be used for the same effect on these organs.
A direct Aśvinī Mudrā pushes the stomach forward,
so its contraindicated for Mūla Bandha.

Thus, Krishnamacharya’s view of what is Aśvinī Mudrā and what is
Mūla Bandha differed, both in terms of definition, technique, and
application, as well as regarding the student starting prerequisites,
Vinyāsa Krama and links to other layers of their Yoga Sādhana.

So Uḍḍīyana Bandha is the technique
for introducing Mūla Bandha.
Uḍḍīyana Bandha elevates Mūla Cakra,
having elevated it, you tie it
and each time it wants to slide
back down, you bring it back up.
Therefore opposite to techniques such as
Bhujaṅgāsana, which is counter to the principle
of Uḍḍīyāna and pushes the Mūla Cakra down.

The practice of Jālandhara Bandha requires the practitioner
to keep the spine straight, the head will be slightly forward.
So draw the head back as well, as it tends to come forward,
ie the centre of gravity in the head moves forward of the body.
If set right you will feel a little contraction in the abdomen.
So, align the spine up, draw the head and neck back, and tilt
the chin in, though not to the throat, the chest or to the heart.

Hands shouldn’t be used in Uḍḍīyana Bandha,
the effect should come from the exhale which
starts in the navel, as if pulling up a piece of string.
It must be pulled up and brought closer to the Maṇipūra.
If this is done properly, then very little to be done afterwards.
Exhale is followed by a small jerk as Uḍḍīyāna pulls the Mūla up.

Lying Āsana such as Taḍāka Mudrā can be
initially used for Uḍḍīyana Bandha as less
strain on the legs and better for observation.

In Practicing the Tri Bandha we engage with Haṭha teachings:
In that, the inhale takes the Agni towards the Mūlādhāra.
This effect on Agni increases with the Antar Kumbhaka,
as the Antar Kumbhaka helps to intensify the fire.
Following this process in bringing the Agni down,
the exhale takes the Mūlādhāra towards the Agni.
Thus the exhale draws the Apāna towards the Agni,
plus adding Uḍḍīyana Bandha holds the Apāna up.
This is the link with the effect on the Kuṇḍalinī,
though in terms of practice, very hard to get.
Here also, the coming down period is important.
For example, do not eat just after, though you feel hungry.
Uḍḍīyana Bandha is a heating process and Madhura Rasa,
such as sweet rice cooked with milk is initially recommended.

In Learning the Tri Bandha we engage with certain potential contraindications:
1. The Tri Bandha reduce the length and subtlety of the breath.
2. The accumulative effect when repeated should be more intense,
but often the opposite is what can actually happen.
3. In the beginning the use of the Tri Bandha can disturb the system and
create tendencies, such as for the practitioner to lose their temper.
4. The continued use of the Tri Bandha can easily
raise tensions in the neck and shoulders.
5. If the abdomen appears to be retracted strongly, but the breath
is getting shorter the practitioner is probably cheating. 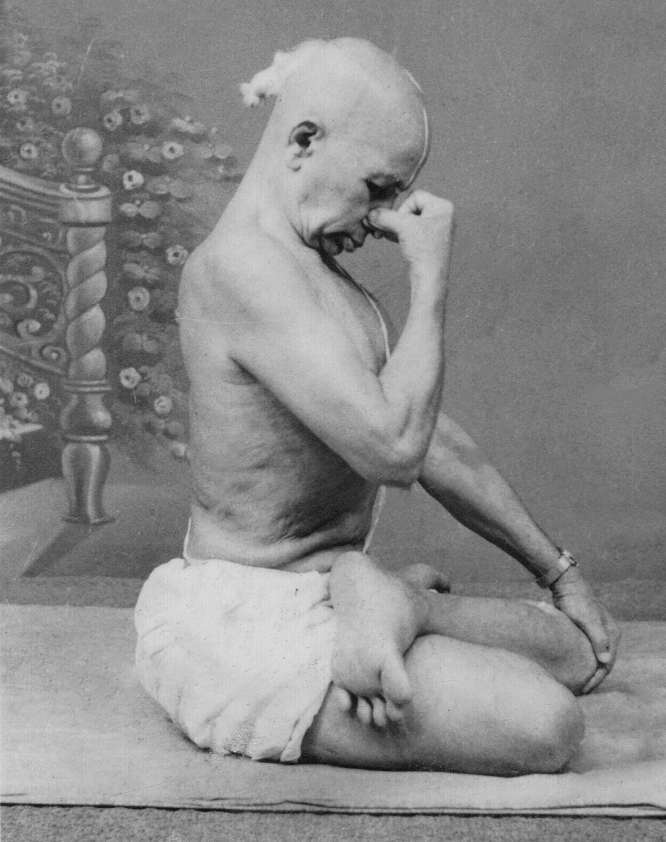 Jālandhara Bandha needs to be re-applied
every time during the Bāhya Kumbhaka,
prior to the Pūraka re-inforcing the lock.

When intending to use  Uḍḍīyana Bandha don’t
hold the stomach area tensely just after inhaling,
or if using Antar Kumbhaka, just before exhaling.
In choosing working ratios concentrate on those
emphasising the exhale and the Bāhya Kumbhaka.

Allow time for the Uḍḍīyana Bandha.
Don’t hurry the act of lifting otherwise
the quality of the Uḍḍīyana will suffer.
Keep the shoulders down and relaxed.
Keep the arms straight with active hands. 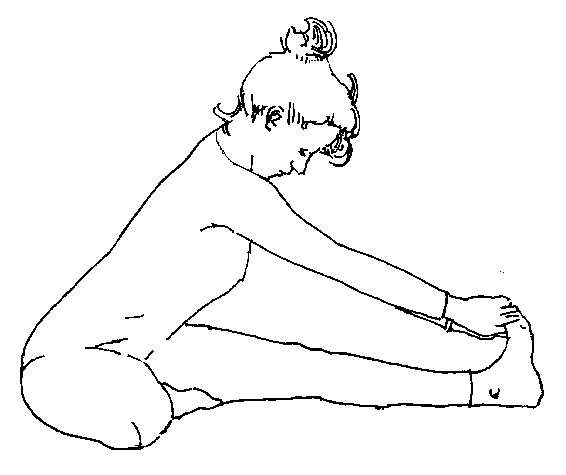 When working with the inhale in Mahāmudrā try
to create an effect of upward movement in the spine,
as if within Bhujaṅgāsana inhaling from the top down,
whilst arching the spine upwards through the inhale.
So straightening the spine lifting the chest upwards,
whilst keeping the Jālandhara Bandha locked down.

In the quest for stability amidst striving in Mahāmudrā.
Do not lose the seat at the expense of holding the foot.
So hold the ankle or shin, or bend the knee slightly.
This will allow the seat to be firm and the spine to work.

Jālandhara Bandha needs to be in place before
interacting with the breath and the spine
through mid-range movement.

Which Āsana support the
principle of Mūla Bandha?
To stop the Mūla dropping,
as in Paścimatāna drawing
the Mūla towards Maṇipūra.

Mudrā Pointer 9 – Whatever the effect Bahya Kumbhaka has……

Whatever the effect Bāhya Kumbhaka has, it is
extended by the use of Uḍḍīyāna and Mūla Bandha.
However the total length of the breath is reduced.
Bandha substantially reduces the lengths
of the Pūraka, the Recaka and the Kumbhaka.
Which and by how much depends on the individual.

Jihvā Bandha, as taught by Krishnamacharya is described as,
‘the big tongue has to turn back and touch the little tongue‘.
The tongue is seen as one of the Ādhāra points in the body.
In that stilling the tongue is a support for fixing the attention.
It is also known in the Gheraṇḍa Saṃhitā as Nabho Mudrā.
Here it is defined as ‘the keeping of the tongue turned upwards,
wherever you are and in whatever the activity you are engaged’.
The Viniyoga of Jihvā Bandha taught that it was to be used
in most Seated Āsana, with the exception of Seated Twists.
Though not so much in Standing Āsana,
or Backbend Āsana like Matsya Āsana.